We went up to the Whangareri Bee Club last weekend to do a presentation about “The Robinson Vaporiser” a Oxalic Acid vaporiser we sell. This was the clubs first meeting in January and there was great turn out indeed.

Kevin Wallace started the proceedings with the news of the clubs great success at the local A and P show.

The club had just processed their honey, we managed to purchase a jar. A dark bush honey that was very nice, with a lighter taste than we are used to.

The honey flow up north apparently isn’t as good as expected and some people are saying the honey flow has already ended now for the year, with reduced yields coming in. Lets hope that’s not the case in West Auckland.

The club also has a extraction plant for membership to use, which is a great idea indeed. One of the extractors is currently out of commission, which is going to be repaired this week.

The club is also looking at setting up a queen breeding program for the club members. Kevin mentioned that in the past the quality of purchased queens has not been good, hence the need for the club to look at other options.

This club really seems really on to it, we were both impressed.

There has also been some reported cases of AFB (American Foul brood) in the area, which is very sad to hear. We found a case last week in Auckland, which has now been confirmed by a second beekeeper. Its so sad to see a hive being burnt, but this is essential part of controlling AFB in New Zealand. 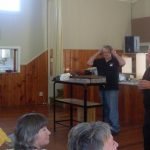 Then is was my time to present a short talk about the Robinson Vaporiser and the use of Oxalic Acid in beekeeping. Which I feel went pretty well considering the large amount of interest at the end of the talk.

It was great to meet such lovely people and talk about bees with them, this club has something very special and hope it prospers into the future. Our only regret is that we don’t live closer, so we could attend more meetings.

If you live in the Northland region I would encourage to join the club, their web site is :- Whangarei Bee Club Web Site

Thanks to Kevin and Dennis for inviting us up to talk at the club. 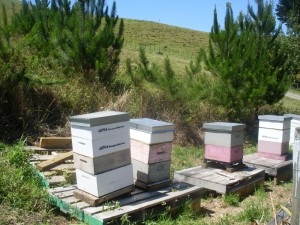 Here are the rest of the Pictures:-

One thought on “Vaporising at the Whangarei Bee Club”