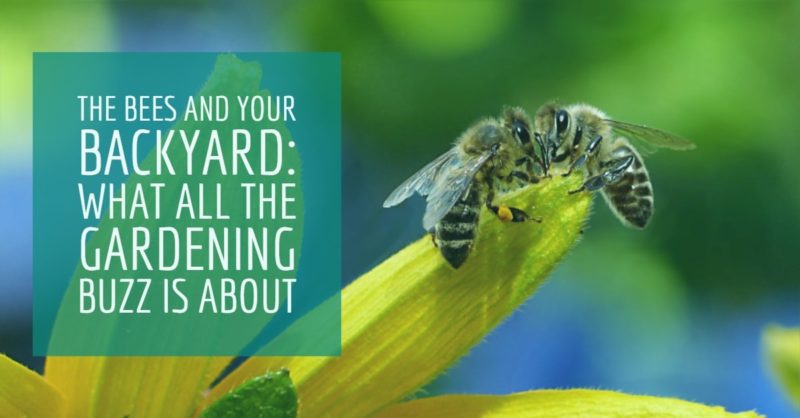 Many of us have often thought about getting into gardening. The concept of growing our own food is one of the oldest of American traditions—to get your hands dirty in the upturned soil, and to watch as, over time, seeds turn into beautiful flowers, herbs or vegetables. But did you know that gardening can actually help to protect one of the most important species on the planet?

Believe it or not, bees, those soft black-and-yellow honey makers, are pivotal to our environment and economy. Backyard gardening can help them. The Guardian reports that bees are responsible for 84 percent of the crops grown for human consumption while the Federal Food and Drug Administration (FDA) states that bees are responsible for an estimated 15 billion dollars in added crop value. The function that bees serve as pollinators makes them responsible for the majority of the food we consume. These include fruit, vegetables, grains and even cotton for the clothes we wear. If we add it all up, around 250,000 species of flowering plants rely on the transfer of pollen, a function that bees dutifully serve every year.

But unfortunately, the honey bees are in a bit of a crisis. According to a 2013 study done by the Yale School of Forestry and Environmental Studies, bee populations have declined by 30 percent over the past decade.

What is the cause of the bee population decline?

There are many theories that explain the decline in bee populations in recent years. A big buzz word (no pun intended) you may be familiar with is Colony Collapse Disorder (CCD). Essentially, this is when worker bees abandon their queen, resulting in the collapse of the hive over the following winter. The reasons for CCD vary among experts.

Some say that the reason for CCD is the use of neonicotinoid-based pesticides, which can cause disorientation and death among honey bees. A study conducted by Health Canada confirmed neonicotinoid residue on 70 percent of the dead bees collected during planting times for soy and corn for 2012-2013. This theory has been confirmed by an article published in Science Magazine.

There are other theories as well. A professor of biology at the University of Sussex, Dave Goulson, asserts that the main reason for the decline in bee population over the years is the loss of wild bee habitats. This theory is backed by the Environmental Protection Agency (EPA).

Others postulate that the parasitic varroa mite and climate change are both factors that have devastated the bee population.

So how does gardening help them?

Although backyard gardening doesn’t necessarily preserve bee habitats in the wild, it does provide much-needed sustenance and homes for bees. Even reducing the number of harmful pesticides you put on your lawn and using organic alternatives can help bees thrive.

If backyard gardening interests you, consider these following options:

Plant a pollinator garden. Using a small yard space to plant a variety of native blossoming flowers will act as a haven for bees. It will also make for a beautiful setting in the spring and summer months. Although some worry about attracting bees due to their stingers, pollinator bees are generally docile.

Try raised-bed gardening. Even in a small space, a raised bed garden can be enough to plant a variety of vegetables, herbs or flowers. Other similar options include square-foot gardening and tire-tower gardening, all of which only require a small amount of space and only a small amount of preparation. This will provide habitat and pollen for bees.

Even if you are new to gardening, crops such as radishes, salad greens, and onions are low-maintenance and easy to get started with. All you need to get started are a few tools, such as a shovel, spade, rake, and pruners and some good porous soil that drains well. Not only will you provide for yourself fresh homegrown vegetables, but you will be helping one of the most important species on the planet the bees.

Christy Erickson created SavingOurBees.org to raise awareness about the dwindling bee population. On the site, she collects and distributes the most accurate and up-to-date resources on the bee crisis and provides information on how others can help in their communities.