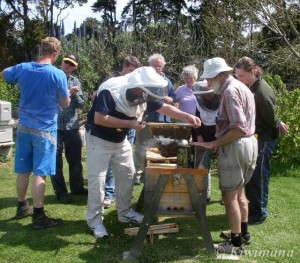 Went along to Auckland Bee Club today for the field day. It was a great day and attendance was good.

Great to catch up with two of our blog readers at the meeting, Barry and William.

William is young man who is passionate about bees, great to see : ) …I think he’ll do well in the bee-keeping field.

I have known Barry for a while having worked for the same slave owners in the past :D. Barry has just a built a top bar hive and is keen to get some bees in it, however judging by the club notice board, there is a real shortage of bees at the moment…we live in hope and the season is still early.

Olivia made an interesting presentation about cut comb, which is something that we haven’t tried yet.

Then, general discussion was held about getting ready for the honey flow and tips on how to prevent your bees from swarming.

Martin and Paul went on to inspect the Clubs Top Bar hive, it was interesting to see how the bees were getting on, they look like they are going well….see my photos below.

Afterwards, I dropped off two screened bottom boards for one of our supporters, the location was close to Eden Park and we spotted several painted Englishmen (Rugby supporters) yaahooing (walking) around. Looks like it’s going to be a good rugby game tonight against France. This is the second quarter final game for the rugby world cup.

PS: Latest news! is that ~ alas ~ it wasn’t too bee for the Englishmen, our commiserations.

One thought on “Mad dogs and Beekeepers/English Men”