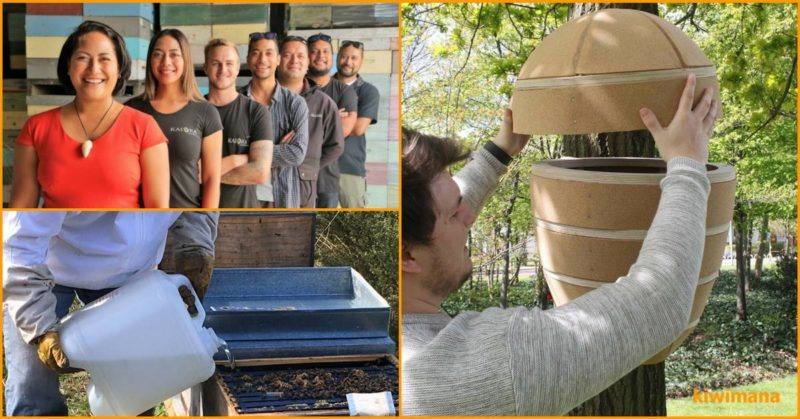 This week we are talking about New Rules, Counterfeit, when Beeing copied is not necessarily the Best form of Flattery, the Sum of Sugar and Honey, and Northland Numbers Stack up for Whanau. This is Episode One Hundred and Nine of our beekeeping podcast. 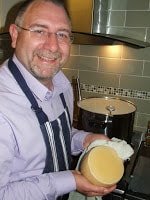 This week we would like to thank Gavin Webber

Gavin has been supporting the kiwimana buzz for over 22 months

Big Shoutout to our listeners in Dunedin, New Zealand this month.

As you guys overseas are coming in to your Summer, we wish a fabulous flow with fruitful bounties from your Bees…

….we on the other hand, are coming to the end of our New Zealand ‘Bee Season 2016’ with temperatures dropping, wintering down should be done by now – treatments do not work well with too many boxes on so Wintering-down involves condensing Brood into the centre of one-box then there is less area for the cluster to manage as the population decreases.

A new section where we play a Corny Bee related Joke sent in from you.

This week we have one from Lisa who by the way missed out on winning a kiwimana $30 voucher but consoles herself with sharing bit of a laugh, through her tears….

Sorry this was later than expected, but here is the draw for a Twelves months free of Hive tracks on any of their 12 month plan.

The Question was who went to the meeting

The winner was Lisa Morrisey from SunnyNook in New Zealand!!!!!

Revealing article from the Sunday Morning Herald by Nina Hendy

Heard the saying “…to bee copied is the best from of flattery…” ? Not necessarily flattering when you’ve worked so hard on something and some ratbag does this…

Hong Kong based Beebot Limited is looking at fundraising for a Flowhive Copy. They appear to have a hired a Consultant that lists fundraising as one his skills on elance. Is this a blatant rip off or a new form of the Tap Beehive?
We asked both sides for a comment…..Who responded? 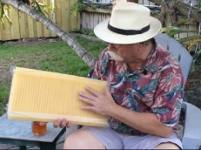 Paulo Jmd Silva Poetic justice, they got rich by selling something over priced with marketing based on lies. Such hive doesn’t help the bees at all, doesn’t replace beekeeping experience and requires exactly the same hive checkups and treatments. It actually promotes bad beekeeping (ex: honey flowing into a jar in the apiary triggering robbing behavior) and pulls the wrong people into buying such thing, they drop the bees inside and expect honey to be ready without inspecting the hive, later they will abandon the hive when things start to get out of hand (dead bees).
Varroa mites will spread to other hives nearby because of robbing.

Also by showing people without beekeeping protection on their videos they promote the idea that all bees aren’t defensive but most are defensive and protection is required and harvesting honey in the apiary is the worst idea.

The idea that the flow hive is better because it doesn’t require extractor is also strange, cheap honey extractors are much cheaper than one flow hive and you also get new wax when harvesting honey. You can have 10 regular hives for the price of one flow hive.

There are Top Bar hives that only require two buckets to harvest honey and get wax, if you make the hives with old or discarded wood they will be dirty cheap. You can have 20 Top Bar hives or more instead of one flow hive. They also won’t break when the própolis and wax starts to block the system.

Another thing is the evaluation/review flow hives they gave to several famous beekeepers to get positive reviews and favorable blog posts.
Graham Manning Sadly, a very common occurrence.
The Chinese have no qualms about copying others success and selling it for profit. Their reverse-engineering is excellent; a shame their products aren’t always as good, or that they don’t give due credit to the original inventors/designers.
Gill Ashmead Mecoy Bloody chinese
Joe Spoto it no the same, it different, you see no looky likely

We called Dai Fuge from Tapcomb in London

Here what they think about this article, and the plans for Tapcombs Future.

It looks like a skep but 21st Century products….mmmm…how will it work, read this interesting short article about this prototype… 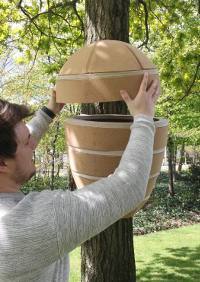 ….designer Will Jordan saw opportunities to improve the artificial hive which has gone largely unchanged for many years. The result is a hive that’s not only more functional but aesthetically friendly!

First, the hive is elevated to mimic that of a natural hive. Placed 2 meters above the ground …

You can find out more at the designer’s site HERE

Give me some sugar my little honey bee…an article from the Business of Bees by Karen Knight. Sugar has been found in some exported honey. 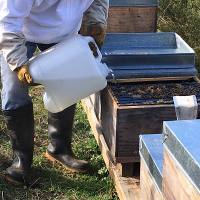 Margaret @ kiwimana Says….new rules should help with sorting this out !!
Here’s a link that might help understand/clarify HERE

Unfortunately not good press for those trying to be treatment free. Do we need to follow the money trail ? A study has been released that say Bee Colony depends on Beekeepers getting better education about disease control.

Bee epidemics have become a growing problem for both wild and cultivated bees thanks to the spread of the cultivated European honey bee. The Varroa Destructor mite is at the core of the problem, because it also passes on bee diseases (I have discussed this more at length in my earlier bee health piece).

The recent Pan-European epidemiological study reveals that honey bee colony survival depends on beekeeper education and disease control. It shows that it is first and foremost hobby beekeepers, who have trouble with epidemics…

Bee Man The author of Thoughtscapism whilst having a scientific background, has not researched this topic in depth like many others and unfortunately cites only research proving her viewpoint regarding hobby vs commercial beekeepers.

I agree that problems facing honeybees managed by humans are complex and multifactorial, with no one quick fix silver bullet cure.

Many field trials on the effects of neonicotinoids are very short lived and have been funded directly or indirectly by the large agrochemical companies who clearly have an interest in getting their products approved.

More recent work by many scientists, including Professor Gulson, Henk Tenekes and others has shown negative effects on all pollinators from pesticides including this group. The half life of neonicotinoids can be years and the routine use of seeds coated in them renders the whole plant toxic and the dust generated when planting often affects other species and leeches into the ground water.

I suggest the author of this blog research the topic more thoroughly before demolishing small hobby beekeepers who choose not to treat against Varroa and who in many areas have the same if not better summer and winter survival rates than treated in treated colonies.
Could the author please give assurances that she never has or currently does not receive any financial or other support from the agro-pharmaceutical industry.

Margaret @ kiwimana Says consider this…varroa transmit viruses into bees, the nurse bees clean cells and if they have viruses it’s transferred into the ‘clean’ cell and then the bee grows inside the cell, it’s feed by the ‘virus bee’ further, a varroa may enter the cell and procreate and further spread viruses while the varroa feeding on the growing larvae…if the brood comb is re-used cells may have several layers of viruses…

Always awesome to hear of stories like this, hard-work and determination is the key to success like this….had a bit of a chuckle at the night lights and the stinging reality of working bees at night hits the bottom end… 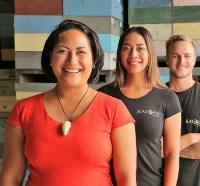 Dean Todd Awesome!
Christopher Dempsey Well Myrtle Rust will put a stop to that! And if they voted National, they got what they deserved; National gutted DOC and tried starving Biosecurity.
Van Driver And then they have to come under the stringent new umf verification process

Lisa asks – How do you tell when you should feed your bees?

Others asked what types of feeders are there?

This week’s winning review was:-
(You will have to listen to the show)

Hi Gary, Thank you for accepting friend request. I enjoy listening to yourself and Margaret regularly on the Kiwimana Buzz podcast. Hope fitbit goes well for you. Padraig

This month we have these great new supporters. 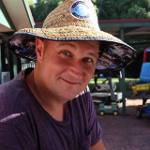 Thanks Justin for your support.

Great sugar shake video. As a newbie it’s nice to see a no frills down to earth informative video like this. What would be the maximum amount of mites in the shake before treatment is recommended?
Thanks. Sandy

Hi Gary and Margaret! I just listened to the most recent episode of your podcast. I really enjoyed it, so I’m going to keep listening and then I’ll leave a review 🙂

One question- what is the “banana!” part about, and where is that voice from? Will I find out about the banana thing in older podcasts?

If like what we do and want to keep the buzz going, support us on http://kiwi.bz/banana