As you know kiwimana sells beekeeping supplies, well that is going well but not going so well is our looking after our ever expanding number of bee colonies.

We started with around twelve hives, with queen cells and swarms collections. This has expanded now to over thirty colonies thus season.

With filling orders, doing hive inspections for customers. The work of looking after our girls has taken a backseat and this has resulted in the following issues:-

So we need to rethink how we are going to managed our bee colonies, and we think the answer is too reduce the number to what we can successfully manage. We have decided to reduce our colonies down to fifteen hives. 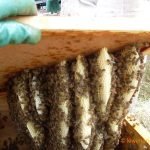 In the height of summer you should really be checking your hives on a fortnightly basis, so we should be inspecting fifteen hives every week. This just isn’t happening with the demands of running a business, Gary’s full job and trying to still see our friends and family.

This has caused undue stress on all parties at kiwimana, and we hope to fix this soon. I feel gutted that the bees have had to deal with cramped conditions during this time. The bottom line is that we need to make new boxes and frames to let the bees concentrate on being bees.

Weaker colonies will need to me merged with larger ones to get them ready for winter. Some of our splits failed and resulted in drone laying queens, we had to merge these with swarms from other colonies to get them a working queen.

Anyway in closing we have learnt :-

We went up to the apiary at the organic farm, and we found the following:-

We have started this work, we found two hives that had queen cells a few months back, these didn’t take. So we have used the Newspaper method to merge these queen less hives with Queen right hives that needed more space (and the extra bees can’t hurt).

One of the other hives also had no queen, so we added a frame of new egg’s to this hive. Hopefully the bees will make use of these new eggs and create a new queen.

The hive we took the frame of eggs from wasn’t overflowing with bees, so I suspect this has swarmed in the last month or so 🙁

The work continues…how are you guys getting on with your inspections…the time to think about treatments is fast approaching for New Zealand.

5 thoughts on “Has it all just become too much?”