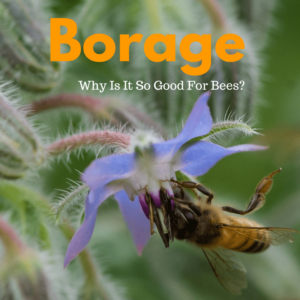 If we have to be honest, if bees disappear this will lead to disappearing of lots of fruits and vegetables, such as almonds, soy beans, apricots, melons, cherries, cucumbers, etc. The list is quite long and actually affects about a third of the fruits and vegetables on the planet. So why not help them out by planting some borage.

Bees are not the only pollinating plant creatures to whom we owe the beauty of nature. The main problem is that they are the main ones and their existence is now threatened. If we add the overall reduction of insects’ species and wild bees in particular due to urbanization, acid rain and other contamination’s, then these small creatures become absolutely necessary in order to make nature survive and help the food industry keep its current form.

Special honey plants are characterized mainly by the beneficial effect they have for honey production. That is the reason why such plants are sown near the apiary. The sowing is taking place on a special areas intended exactly for this purpose, in order to give bees opportunity to use them in the best possible way. In addition, such crops are particularly needed in areas with poor and discontinuous collecting pollen. In these cases the main purpose of the special honey plants is to make them bloom at the intervals when there are no other blooming plants nearby the apiary and by this provide food for the development of the bees and for honey collection, too.

Borage – one of the most important honey plants

Borage is not only a honey plant, but also one of the most famous ancient spices and a valuable herb. It is traditionally cultivated as a vegetable type and spice, but it is also gwon for pharmaceutical purposes, because of the oil extracted from its seeds, which is often called “star flower oil” or “borage oil”.

If we can believe the descriptions of Dioscorides and Pliny the Elder, borage was probably the magical plant used to make a drink of oblivion mentioned in the Homer’s “Odyssey”. The truth is that this plant were used in different ways known from ancient times.

Borage – how is it grown?

Borage is an annual plant with branching stem that usually reaches a height of about 25 inches that is believed to originate from Syria. Now it is grown literally everywhere, and only in North America it takes an overall area of 20,000 acres.

Centuries ago, the Europeans used to make some tea form the leaves of the plant by soaking them in wine. In 1597 a herbalist named John Gerard pointed out several advantages of the herb and even said that the syrup made from the flowers of borage helps healing depression. Nowadays borage is being sown in order to attract bees, which makes it a valuable honey plant.

The plant is usually sown during early spring, and the harvest is carried out right before seeds’ maturation. At the beginning, borage blossoms are pink, and then they become blue. The plant has a long flowering period that is basically during the middle of the year, which makes it one of the bees’ most-loved plants during this period. The stems of borage are covered with dense pappus, and the blossoms are extremely beautiful, painted in violet-blue and gatheres in loose clusters. The leaves of the plant are thick and succulent and have a scent of cucumber.

Borage is not demanding when it comes to the soil, where it is planted. It is very well-grown in humus-rich, more loose soils, and also tolerates shading pretty well. The soils that are considered to be the best for growing borage are the ones fertilized with organic fertilizers.

Borage usually gives about 30 kg of honey per acre, and nectar excretion is benefited mostly by warm weather and moist soil. However, the benefits from borage are not only associated with beekeeping. Its blossoms are used for medical purposes, and it is also considered to be great grass for cattle.

Other uses for Borage

Apart from being used as one of the main honey plants in beekeeping, borage is also used in:

Its leaves and flowers have anti-inflammatory, antispasmodic and tranquilizing effect. It is also used as a diuretic and has a beneficial effect for stomach, kidney and rheumatic pains.

The plant is used as an ingredient of many skin rejuvenating lotions and creams.

It is mainly used for soil fertilization.

Have you planted and Borage in your garden and do you find you get lots of bees on the flowers?

Brandon is the manager of End of Tenancy Cleaners London. He works very hard and in his spare time taking care of his bees calms him down.